skip to main | skip to sidebar

Seeing all the fresh street art from the likes of Berlin to Barcelona to Brighton, has inspired me to produce a whole new canvas Stencil section for WHoArtNow.co.uk totally devoted to stencil art. It's been around for years, but the emergence of street art, using stencil art has recently got a hell of a lot of publicity, since certain subversive and guerilla artists, namely Banksy, have got their names all over the news, the papers & even the Tate gallery.

So how does a graffiti artist, that effectively vandalises buildings get his work up in the Tate gallery? Massive exhibitions like Warhol vs Banksy with canvases, prints and silk screens are now a big thing. So, when did street art suddenly become accepted? In Brighton recently, I was pleased to see that Banksy has been invited back to produce a new version of his "Kissing Policeman" as the old one was vandalised. The Tate are even telling Camden City Council not to remove his work from the streets. Could Street Art and stencil art now be seen as a pleasant, accepted form of artwork?

[Warhol vs Banksy] left -Banksy's version of Warhol's Pop Art Marilyn print, which went for over £50 grand at auction. For both of these artists, Money has had the last word for them, with their art fetching huge somes of money with recent collectors.

Street art & artists have been doing their thing for years. I have been a personal fan of SWOON for as long as I can remember. To see something so beautiful & fully appreciate the effort & time that has gone in to making such a complex stencil is a very personal experience, as most people will tell you. This really explains the recent shift in opinions for stencil art - it is, at the end of the day - fantastic artwork. Powerful, personal, and extremely unique artwork that uses the street as a giant art gallery for the word to see. So where did stencil art all start? Stencil art is effectively a form of Street Art, which is Art created in public spaces, i.e. the streets. As it is in the public domain, as a result, it is a totally free form of art, intended solely for the general public. As a result, it has become a backlash against corporate society, and commercial art (i.e. advertising) , and so is usually subversive, and often of an illicit nature.

Stencil graffiti involves using paper, cardboard, or other special medias to create an image that is quickly reproduceable. The design is cut out of the medium, & the image is transferred to a surface through the use of spray paint/ roll-on paint. 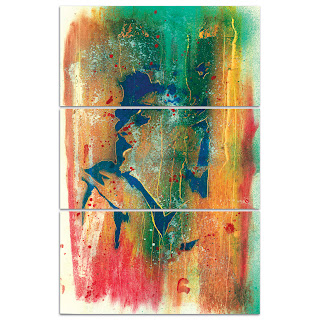 Stencilling basically involves applying paint on a stencil to form an image on any surface underneath. Often, multiple layers of stencils are used on the same image to add colour or create the illusion of depth.

An example of things to come in the future for WHoArtNow canvas designs [above] Madonna Stencil (click to enlarge) by Mike Walker hand stenciled on canvas exclusively for WHoArtNow.co.uk (2007) ETA: 2008. Visit the stencil section for more info/
Posted by WHoArtNow: Bespoke Modern Art at 13:47 No comments:

As a designer, I often get asked where my ideas come from. “I love that canvas – where did the idea come from?” is a frequently asked question. It’s always tricky to explain, but one day I had one of our canvases – the "Chocolate Japanese Silhouette" hanging

on the wall at home, and on the opposite wall was the Japanese print that it had originated from. I explained: “I took elements that I liked out of the bottom right Japanese Print, made it really minimal, played around with the layout and then added three really complementary colours.” “But it looks better than the original!” she said. I felt a bit embarrassed about that comment, but it dawned on me later that that is what creativity is all about – a kind of looping cycle of creation and recreation. We all get inspired from seeing one person’s creation – be it art, music, films, architecture, poetry, cookery etc. Then if we like it enough, the influence will come out in our work. It’s kind of like sampling art – that kind of sums up how we create our canvas designs at WHoArtNow. Take a little bit of what we like and add our own unique style, colours and perspective to it.

It’s difficult to list all of our inspirations verbally, so I’ve decided to put it in a blog, and just go through a few of the areas of art that we draw interest from. Notably: Japanese Florals, Street Art, Pop Art, Macro Photography and , Retro Kitsch, Music / Movies – just to name a few. I’m going to have a go at describing these categories over the next few months, really just to give anyone an insight into our design process.
Posted by WHoArtNow: Bespoke Modern Art at 10:26

This Blog is all about the inspiration behind the contemporary prints of WHoArtNow.co.uk. We will going through all the sections of our website, and siting some of our main influences - covering Retro Kitsh, Cult Icons, Macro and Black & White Photography, Japanese Florals, Street Art and Digital Abstracts.